Chiusa and his holiday villages

Romantic and Picturesque
Medieval walls and the authentic South Tyrolean small-town flair: Klausen/Chiusa, the heart of the Eisack Valley / Val d'Isarco, is a truly lovable little town. The shops in the preserved townhouses with their wide mix of goods, including products crafted by local artisans as well as southern specialties and worldly fashions, are really worth visiting. And while you're at it, why not stop and enjoy a cappuccino and some roasted chestnuts in the town square?

All Paths Lead from Klausen/Chiusa
Once strategically situated at the important crossroads between north and south, this town is still easily reached by car or rail, and still serves as the hub of our multi-facetted region of wine and chestnuts: Klausen/Chiusa is quickly and easily reached by car, bus, and rail, and from here emanate all the hiking trails and bicycle paths which will take you to all points of this fascinating region. Our natural promenade will entice you to go for easy strolls starting directly from the center of town.
All around Klausen/Chiusa, you'll find groves of chestnut trees, vineyards, and woods inviting you to go for extensive pleasure hikes. With its subdivisions of Gufidaun, Latzfons und Verdings, the resort area extends from one side of the valley all the way up to the peaks of the Sarentine Alps; on the other side, it opens up to the gateway of the Eisack Valley Dolomites.

The City of Artists and Albrecht Dürer
The medieval city, which is surpassed in height by the mighty Säben/Sabiona monastery mountain, proudly calls itself the "City of Dürer." Here, where the city was the scene of intense artistic activity just a hundred years ago, is where Albrecht Dürer stopped during his journey through Italy. He exploited his portrait of the city as a background for an allegorical copper-plate engraving titled "Das Grosse Glück" ("Nemesis.") Today, Klausen/Chiusa is still numbered among the most-beautiful of Italy's ancient cities: Its tower-studded facades, its wide alcove balconies, and the picturesque signs of its old inns and pubs were all that was needed to convince the club "I borghi piú belli d´Italia" of its worthiness. And the "Treasure of Loreto" (a singular collection of works of art) in the city museum has got to be seen to be believed.A visit to the Säben/Sabiona convent situated on the mountain overlooking the city will provide you with a better understanding of the local culture, as well as with breathtaking views of the surrounding landscape. This picturesque Benedictine monastery is one of the oldest place of pilgrimage and the first bishop's residence in Tyrol.In Klausen/Chiusa, the possibilities are limitless. Come to the heart of this multi-facetted vacation region and discover for yourself! Wirtshausschilder haben den Club „I borghi piú belli d´Italia" überzeugt. 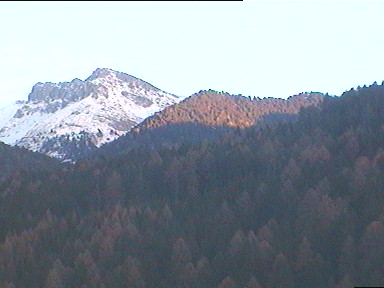